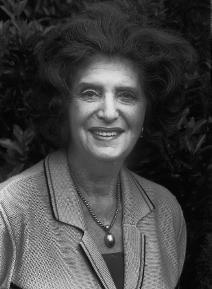 Searching for further enlightenment led me to her home deep in the heart of rural Cheshire.

Rita, much loved daughter of the late Rhoda and Horace Benjamin and twin sister of Geoffrey, who sadly died recently.

She married Maurice Brisk of Manchester, a company director, music lover, sportsman and well-known "Ace" bachelor to name but a few accomplishments. They were to travel world wide together during their long and happy partnership. Maurice passed away in his 98th year. Rita describes their long mutually shared life as "Times" blessing.

Rabbi Miller officiated at their wedding in 1949 and the whole community celebrated the event.

Writing since ten years of age, educated privately at Collingwoode School in Middlesbrough and boarding school in Harrogate, Rita joined the North Eastern Evening Gazette as a cub reporter. She learnt word structure and word power, which has served her well.

Both the twins served in the Navy in Word War II, Geoffrey in the Royal Marine Commandos. Mentioned in despatches, his Commanding Officer commented he made light work of heavy going. Rita joined the WRENS and experienced "Operation Overlord"—D.Day. This experience was to prove indelible. After demobilisation she wrote her first book, "Jenny Wren" which lies in London’s Imperial War Museum and is regarded by their Curator as a graphic, moving account of World War II. "The Song of the Seasons" with the Duke and Duchess of Westminster’s personal foreword is now part of the London British Library’s heritage collection.

Royal Family profiles of the Prince of Wales and the later beloved Princess Diana and the Queen Mother, have Royal commendations which are valued family possessions.

The Manchester Sketch, Jewish Life Magazine and the Recruitment Journal all contained her many literary diversities.

"Dawn and Dusk", a collaboration with an Austrian author, now Israel-based, explores the Nazi Tyranny leavened with Rita’s Love Odes.

Future plans include lecturing to schools on World War II and Word Power.

Finally, I have many sentimental links with the Middlesbrough Community. Her paternal grandparents Jane and Hyman Benjamin brought to that town Judaism with a sense of Englishness. Charitable mitzvah was their intrinsic gift.

The first founding family whose son Horace Benjamin followed in his father's tradition. Both served as Presidents of the congregation, for many years. Horace Benjamin was beloved of all who knew him. Rev Kersh referred to him as "A prince of Israel"- Wise kindly and courteous, his lasting keynote. Accorded the military medal in World War I for gallantry on the Somme.

Rita, Founder Fellow of the International Poetry Society and International Academy of Poets, Cambridge, continues her literary journey with a novella "A Fine Romance" and yet another collection of children's verse, "Favourite Choice", with illustrations by her youngest granddaughter, Rosemary.

Writing if good enough is "eternality"; today’s litterateurs value the past but achievement lies within their Present. Rita Brisk epitomises that creativity.

Cultural Societies can contact her through Donald Wiseman, Jerusalem

The Holocaust’s pall
depicted
On an exhibition wall
Bared bones evoking
groans
Horror and despair
Ours
to bear
Time cannot efface
Humanity debased
Wrought in gold
heritage unfold
Kiddish cup and praying shawl
Where are they all?
Bud and blossom trees in
Spring
Children’s murder sing
Innocent eyes rise above the
funeral pyres
Memorial light
ignite
Their darkest night
From the grave
Massada
Not the slave
Judea
does not depart
Within the cosmic heart

The Long Gallery Of Life

Sepia portraits of those we have loved encapsulate Times’s
Testament
Departures insight, the rose surrounded by thorns tear the heart
capture the calender’s concept
Guardians of our past trustees of the present sentinels of the future
Still they smile inviolate to the inlets of change
Giving and sharing compassions compound, essence and kernel of all religious belief
Memory remains integral illumining "The Long Gallery of Life"

Burning cordite,
marching feet,
the scream of sirens.
How well I remember the tension of those
invasion hours.
"D Day" Portsmouth 1944.
All through the night
and long into the day
came the steady thud of marching men,
the swell of a calm sea as our armadas
nosed their way to the French coast.
What indomitable spirit inspires men
to go to war with a smile and a song?
Recollections of
"Take Me Back To Dear Old Blighty"
and "Land of Hope and Glory" as
the thronging landing crafts moved forward,
forward to Victory by the fruits of
selflessness, devotion to duty,
and the fighting prowess of a truly
great people and of an even greater country.